Grandma Lee and My Miracle Detox 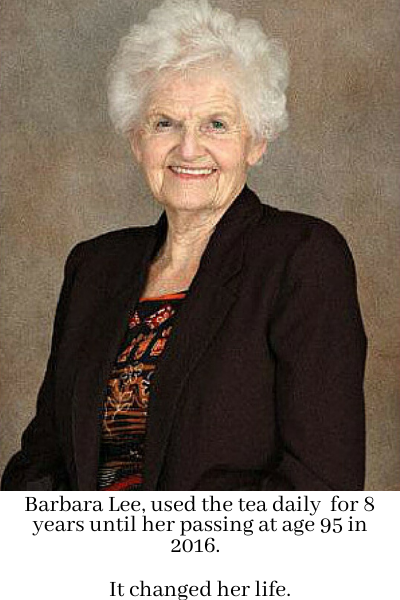 Barbara Lee, at 85, was in very bad shape.  She was bed-bound much of the time with painful osteoporosis and arthritis complications.  Lifelong terrible constipation had gotten worse for years, to the point that now she was taking up to 11 products to “go.” When she finally did have a bowel movement, it was often explosive, with no warning. There were terrible, embarrassing experiences and messes.

She was spending a lot of time sleeping in a fetal position and hoping that her time on earth would not last too much longer.  Then along came the tea … she was the reason we tried it!  30 days after starting, she was a different person. Her doctor was shocked.  Within several months, she was able to travel! She went to grandchildren’s weddings and stayed with other family members.

The tea enhanced her mental capacity!  She was sharp, full of life and entertained friends and family from her bedside until her last few weeks. In her last conversation with Carolyn the day before she died, she told Carolyn to “never-ever stop sharing the tea.” She greatly wished that everyone know about it!

Please enjoy the adorable song she recorded and put on Youtube, and the letter she wrote in 2008 after her first month or two on the product.   This was  in our first  days of sharing the tea.  (It is no longer called Holy Tea and the name “My Miracle Tea” is now a registered trademark of the United States.)

It made a huge difference for her, greatly improving the quality and enjoyment of her life in her last years.  She passed just before turning 95, still talking about how helpful this product had been.

Dear Family and Friends: You have all known me so well for so long that I hope you know I would never recommend something like this without truly believing in it.

When Carolyn told Susan and I about it, we were willing to test it with her. As you may know, she has been encouraging people with healthy living for a long time through her website and teaching.

We were pleasantly surprised with how tasty it is and easy to prepare, but the greater surprise came as there was soon evidence of a detox healing that presented itself as a kind of flu-bug.

Although I was “under the weather” for several days, my energy soon returned, then soared. Then some very troubling bowel problems that have caused much inconvenience and distress for many years began to significantly diminish. I cannot begin to express what a relief this is on many levels!

Even more than my physical energy, I am now experiencing a delightful new emotional lease on life. When you’re as old as I am, there are no promises as to how many days are left.

As of a month or so ago, I felt I was ready to be with Sheldon again, (…can you believe he’s been gone for going on 18 years?) and to serve my family from the other side.

Now I am enthused about sharing this life-changing product with my friends and family. Who knows? This just might be the little business I’ve wanted to establish all my life.

At my last doctor’s visit, the doctor took one look at me and said “What has happened to you? this is NOT the same woman that was here 3 months ago!” He could tell that my aches and pains from arthritis and osteoporosis were almost completely gone without pain killers.

He was shocked when I told him about my bowel improvements. When he asked to know what I’d been doing differently, I was reluctant to tell him it was an herbal tea … thinking he would dismiss it from a medical point of view.

Instead, to my joy and surprise, he asked how he could order the tea and said, “Medicinal herbs have been here on the earth far longer than we have!”

The truth is, medical science has no answers for the source of many modern illnesses such as fibromyalgia, nor do we have the answers. Anything that provides relief for these distressing ailments needs to be considered!”

With all my love,