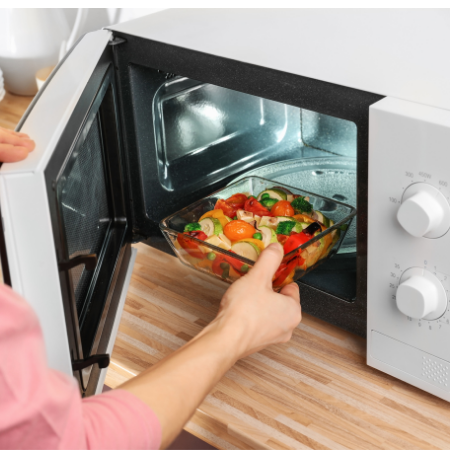 You have to wonder … Do canned or boiled veggies really lose all their nutrients?  Think about it: you BOIL things to sterilize and kill germs! Does microwave cooking kill veggies? And when they’re pulverized in a blender, does that destroy any of the benefits?

In a nutshell: Cooking, even microwave cooking, actually RELEASES some nutrients!  Use as LITTLE water as possible when microwaving — that’s where the nutrients are loss. Fresh is only better if it’s eating within a very few days from the grocery store, and ANY way you eat your veggies is better than NO veggies!

The primary factors in retaining nutrients when using a microwave are short cooking times and little added water.

According to Harvard Health Publications, certain nutrients, such as vitamin C, will break down when exposed to heat, regardless of whether you cook using a microwave or through more conventional methods.

However, because microwaves cook foods quicker, they may actually do a better job of preserving nutritional content that can be destroyed as a result of high heat exposure. Nutrients are also better preserved when minimal amounts of water are used during cooking. To further preserve the nutritional content of vegetables, Columbia University recommends not peeling the vegetables and using large pieces. Cover the foods so they steam during the cooking process, further reducing the cooking time.

During the cooking process, some nutrients leach out of the vegetables and into the cooking water. The longer they cook, the more nutrients escape. When making a soup or stew, this may not be an issue, as the broth is consumed along with the rest of the soup. However, when cooking vegetables intended as a side dish, a snack or a meal, boiling will result in vegetables that have some level of diminished nutrients. Overcooking also dulls color and flavor.

We love our steamer for veggies and use it continually!

Unlike boiled vegetables, steamed veggies are cooked briefly and then removed from the heat. This can be done using a vegetable steamer or a regular saucepan with a cover. During steaming, the heat of the steam cooks the veggies, and they are spared from the boiling water. The goal of steaming is to cook the vegetables until they are no longer raw, but still bright and crisp. This preserves color and flavor, and some of the nutrient content.

The flavoring that is often added when veggies are boiled (i.e. broth and spices) can be provided for steamed veggies by putting the seasonings in the water underneat the steamer.

According to a report published in the “Journal of Agricultural and Food Chemistry” in 2008, steaming or boiling actually preserves some antioxidants in vegetables. The study tested several vegetables, including carrots, zucchini, broccoli, spinach, mushrooms, cabbage and peppers. During their study, researchers examined the impact that cooking had on various antioxidants, including carotenoids, ascorbic acid and polyphenols. They found that while some nutrients, particularly B vitamins and vitamin C, are damaged during cooking, other nutrients may be released when vegetables are cooked.

And On To Fresh vs. Frozen Vs. Canned Veggies

Fresh veggies and fruts from the grocery store are only better if they are eaten quickly!

Most of us believe that fresh produce has the highest nutrient content, but that’s only true if you pick and eat the fruit or vegetables the same day. By the time fresh produce is picked, processed, travels to your local grocery store, sits on the grocery store shelves and then in your refrigerator, water-soluble vitamin content has decreased.

According to the Produce for Better Health Foundation, frozen and canned produce are processed within hours of being picked, and contribute important amounts of vitamins and minerals.  Produce for freezing is picked off the vine at its peak ripeness and frozen quickly to preserve nutrients.

Blanching can actually increase the content of some nutrients. Frozen green peas actually have more beta-carotene, a precursor of Vitamin A, than fresh or canned peas. Canned tomatoes have the highest levels of beta-carotene and lycopene, a phytochemical that helps protect against heart disease and some types of cancer.

Blending Vegetables
There are some experts claims that blending fruit and vegetables destroys 90% of the nutrients in them. They stated that the loss of nutrients is due to the oxidation process that takes place during blending.  Also, the fiber is broken down.

But think of it this way, our teeth, when we chew, breaks down the fiber and does the same thing! Blending primarily changes the food’s texture and appearance by making them ore liquid and drinkable

While it is true that blending fruits and vegetables leads to loss of nutrients, it is nothing to be concerned about as the loss is so small. It is similar to the loss that occurs when you cook or microwave your vegetables. Blending the fruits does not destroy fibers, nor does it destroy nutrients. (www.KitchenHabit.com)